[First in a series, to explore what it means to be average (from U.S.-based standpoint)]

When did it become so bad to be average, to the point that people would rather be “special” in one thing and forsake all others, all the while claiming they’re in the upper echelon of life’s strata?

Whenever I think about the fall of the “average” person, my mind turns to a classic American film, that I disliked from the get-go; not for the cinematography and all else that goes into making a film, but for its overarching message. In “American Beauty”, one line in particular stands out: “Which is great, because there's nothing worse in life than being ordinary.”


The movie caricatured several types of “ordinary” people flailing at their wish to stand out.

In hindsight, of particular humor, is the depiction of real estate people. I was not working in real estate at the time but even I saw the representation as grossly exaggerated, and mean - a great segue into the different levels of average: mean, median, mode, and range.

There are other measures but let’s focus on these most common ones, particularly the mode.

As defined, the mode is the most repeated result within a population (a situation); the norm. For example, in the U.S. the norm for nuclear family life was husband, wife and two children. Norms shift and that is no longer the case. Yet, that composition is still viewed as the average U.S. family. The tricky thing about “the average”; it does not change. The average really is a constant.

Think back to grade school up to the end of undergraduate studies. The grading system had a numerical value tied to a letter value. If you told someone you got a 70 in a class, automatically that person processed it as you received a “C”.  A 90 meant an “A”. Of course, most schools implemented a plus/minus system, but the concept was still the same: a “C” was the average grade, even though “D” was passing.

Over time, people leave school and there really is no measure for determining what is average, only “passing” performance, behavior, etc…This leaves the mode (the style, the norm) to be the sole determinant of the average. But, what happens when the norm is like my favorite character from Cheers? Nobody wants to be Norm, correct? He is everyone’s idea of the failed, average American married male; not realizing that even though a guy like that was the most repeated outcome, Norm was not the mean. 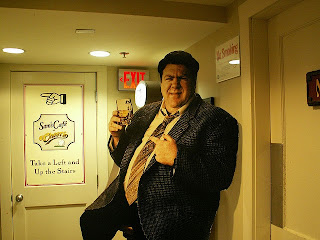 The true mean was still receiving at least a 70, a “C” - not avoiding his wife by being at the bar, had children, worked hard in his career, etc...

The question most of us have to ask ourselves: am I average? To determine this, count all the things you know about or know to do – everything from carpentry to cooking; fashion to football. If you are having trouble drawing up a list, go to your local college and browse the current semester’s course catalog. In its offering of classes, check off the number you would pass – not just the mental, theoretical based ones, include the practical, the physical ones. For example: Biology as well as Tennis. Each subject only counts once, as we are not currently dealing with mastery- upper division level coursework. You pass for “knowing about” as well as knowing “how to”.

How many did you count? Did you reach a C-level? I’m sweating because I sure hope that I’m average. But not to fret, as usual, I have brought along two friends who have gone and continue to trek way past the norm…

BYRON FRANKLIN
Recently billed as “The D.J. with the J.D.”, Byron is a person you can place in any environment or field, and he will find a way to build alliances, shape the place to his personality and ways of being. Check out this video from his youtube channel:

KIM SEXTON-LEWTER
Humility is an attractive trait and to hear Kim who is the pure life of the party and a consummate friend tell it, you would understand why range might be the most important characteristic to possess. Check out her bio and see why I’m a fan, a friend.
Newer Post Older Post Home
EDITORIAL SERVICES