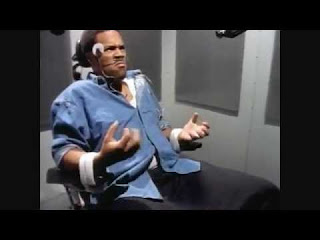 Alex Smith, it is time for you to channel your inner Redman 'cause Tonight's Da Night.

(LET'S GET READY TO RUMBLE!)
In this corner we have what you promised to be
Star Quarterback that is hard enough
That he can throw a whole bunch of TDs
With no INTs, scramble for a first, without a block
Then turn around and do the same damn thing on First Down.
'cause Alex Smith should be pissed
'cause he's gotten coaches fired
'cause he couldn't maintain the starting job
Then got traded and might start the pattern all over again
but Alex Smith, it's TIME TO BLOW THEIR MIND
Give them a punch of the funk, knock all of their gold tooth loose
(POO POW)


Tonight's the night where Alex Smith has to prove whether he has what it takes to be an elite Quarterback in the NFL. So far, his career has been one marked for a notch above the dreaded tag of "game manager".


His stats show a consistent performer who is ready to take that next step. Unfortunately for Smith, his time with the Kansas City Chiefs, in the AFC West has coincided with that of Peyton Manning's with the Denver Broncos.

Focusing on tonight and the implications for a playoff berth: the Chiefs have to keep pace with the Broncos (3-0) and the Oakland Raiders (2-1).

Standing on their way is a man looking to redeem himself and the Green Bay Packers after a crushing defeat last season's NFC Championship game.

Aaron Rodgers stands in the way of any chance Alex Smith has to be that...

For now, do the Discount Double Check and enjoy this short playlist!