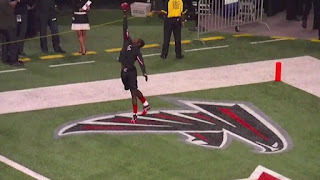 Barring a major injury, the Atlanta Falcons are heading to the NFL playoffs. Whether they go as the division winner will not be decided for a few weeks because, just as the Falcons are undefeated at 5-0, the Carolina Panthers are 4-0.

On paper, their next real challenge will be against the Vikings in Week 12. The Falcons do not face the Carolina Panthers until Week 14. By then, it is conceivable, that the Falcons could be undefeated while the Panthers have 4 losses.

This season mirrors the 2012 season when the Falcons won their first 8 games, finished with a 13-3 record and lost in the NFC championship game.

Unlike that season, Atlanta has a new head coach (Dan Quinn) and the division will likely be contested until the matchup against the Carolina Panthers.

The Falcons also have to keep track of the Green Bay Packers and Arizona Cardinals when it comes to the number of wins needed to clinch home field throughout the playoffs.

For now, enjoy this short playlist/mix about flying above it all with a coach on his maiden voyage.