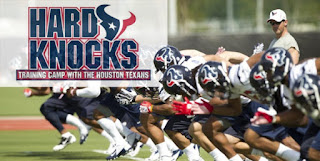 The Houston Texans were picked to finish second in the AFC South division, a few games behind tonight's opponents, the Indianapolis Colts. A funny thing happened - the Colts are struggling this year, under the weight of expectations and an injury to starting Quarterback Andrew Luck.

While Matt Hasselbeck helped the Colts to a victory last week against the Jacksonville Jaguars, Luck's absence is good for the Texans.


As an expansion franchise, the Texans have made strides in many areas, but have yet to fully entrench a reputation as a hometown sports favorite.

An unexpected winning season that brings a division championship and playoff appearance can change that, but they have to take it one game at a time because these are indeed desperate times for the franchise.

For now, enjoy this short playlist/mix about giving it your all to claim what is yours.
Newer Post Older Post Home
EDITORIAL SERVICES